The issue of immigration has featured prominently in the Brexit debate. Following the decision to leave in June 2016, the UK Government announced it would establish new arrangements for controlling immigration. However, 18 months on and still no concrete plans have been announced.

British farming provides 60% of the nation’s food. The UK farming industry is heavily dependent on seasonal workers from Eastern Europe. Low unemployment rates in the geographical areas where farms are located, plus the seasonal nature of farm work, makes it difficult to attract domestic workers.

Problems recruiting workers has meant that, across the country, tons of fruit has been left to rot. Fearful that supermarkets will think they are not running their businesses effectively; farmers are reluctant to speak out.

Why not employ domestic workers?

Despite the recruitment efforts of many farmers, the response from the local population is often poor. Response to adverts is low, and when domestic workers do secure work, they frequently fail to stay on. Generally speaking this is because British nationals are not attracted by many aspects of agricultural work.

It is sometimes unfairly seen as poorly paid, low skilled and lacking career prospects. This, combined with long hours in remote locations and the physical nature of the work, means that potential workers often choose to look for work elsewhere. This is particularly true for seasonal work and permanent jobs in some sectors such as the pig industry.

Efforts to attract UK workers may be enhanced by the introduction of the Universal Credit, due to be fully rolled out in 2022. The Department for Work and Pension estimates that it will incentivise a further 170,000 people into work. However, there is no sectoral analysis to suggest how many of these workers may end up in agricultural work, nor is there any analysis of where the majority of these workers live in relation to the rural businesses that need their labour.

How many non-UK nationals work in the farming industry?

It is difficult to accurately measure the number of non-UK nationals working in the farming industry. Estimates from a number of different sources vary. For example, data from the Office for National Statistics (ONS) has limitations as it does not include seasonal workers or those workers living in communal accommodation.

According to figures from Department for Environment, Food & Rural Affairs (DEFRA), in 2005 there were 476,000 people employed on agriculture holdings across the UK of which 67,000 were estimated to be seasonal workers. However, the National Farmers Union (NFU) believes the actual number of seasonal workers is significantly higher.

Industry research shows that the horticulture sector alone needs 80,000 seasonal workers a year to plant, pick, grade and pack over nine million tonnes and 300 types of fruit, vegetable and flower crops in Britain. Approximately 75% of the UK’s seasonal horticultural workforce workers are recruited from Romania and Bulgaria with the remainder largely from Poland and other Eastern European countries who joined the EU in 2004.

Creating an immigration system that recognises and meets the specific requirements of agricultural industries will be critical if this sector is to continue to deliver the current level of services it provides to the British public. But this has not been helped by frequent statements from Government ministers telling us about the target for net migration falling to the ‘tens of thousands’.

What is the impact of the referendum to attract workers?

The recent Immigration Bill has provided some clarity for EU workers in relation to the new ‘Settled Status’. However, given that the NFU has stated that the horticultural industry had a 29% shortfall of seasonal workers in September 2017 (up from 17% in May of the same year) safeguarding the rights of EEA workers in the UK is only the beginning – the UK must be able to continue to attract these workers.

The Government has asked the Migration Advisory Committee (MAC) to assess the economic and social impact of EU citizens in the UK and consider options for a future immigration system. The MAC report is not due until September 2018. As such this will leave very little time to implement the findings into an effective and manageable system by the Brexit date of March 2019.

Will we be able to access a competent and reliable workforce?

It is vital that the Government addresses labour shortage concerns as a matter of priority. Most countries operate arrangements for recruiting seasonal workers that extend well beyond the EU to countries such as Thailand and Morocco.

The supply of seasonal workers in the UK for 2018 and 2019 seasons is now in jeopardy. A system that will not only continue to allow sufficient overseas workers to take up seasonal jobs in the UK, but also to give security to those workers to come to the UK for a few years and then return home must be urgently established if we are to avert a crisis.

Is automation the answer?

Policy makers often cite automation as the ‘solution’ to farming’s labour needs. Whilst there have been substantial improvements such as table top strawberry growing and poly-tunnels which make conditions easier for workers and allow them to work at a faster rate – many crops such as berries, apples and pears require skilled handpicking to avoid damaging the fruit. Technology has not yet been developed to replace manual workers at an economically viable scale.

Current industry predictions suggest that automation remains at least a decade away. Even then, the scope for automation to replace manual labour is limited. For example, in the livestock sectors technology will never be able to fully replace good stockman ship, which is essential for animal welfare. This means the industry in general will remain dependent upon manual labour for the foreseeable future.

What are the possible solutions to labour shortages?

A solution to the farming sector’s permanent and seasonal labour is now urgent to avoid losing a critical mass of workers. We have examined some schemes previously adopted in the UK that may provide a solution to this problem:

The SAWS was a quota-based scheme that enabled UK farmers to recruit temporary overseas workers to carry out planting and harvesting of crops, as well as processing and packing. It was controlled by the Home Office and managed by contracted operators. Workers arriving under SAWS were issued with a work card which gave them permission to work for one employer for a fixed period from five weeks to six months. They had to be paid at least minimum wage and be provided with accommodation by their employer. The scheme closed at the end of 2013.

Although it has been suggested by Minette Batters, President of the NFU, that the UK urgently needs to re-introduce a SAWS similar to the one that existed between 1945 and 2013, it is unlikely that a replica scheme would work in the current environment. SAWS operated alongside freedom of movement within the EU, which is unlikely to apply in future; it only ever provided 18-21,000 of the 80,000 workers needed; and the six-month limit under which the scheme operated would be too restrictive now, as the extension of the growing season means workers are now required for up to nine months.

The PBS was phased in to the UK between 2008 and 2010. Non-EU nationals are scored against certain attributes, such as qualifications, occupation and language skills. If they accrue a sufficient number of points they can enter and remain in the UK under various visa categories. The PBS operates under five tiers: 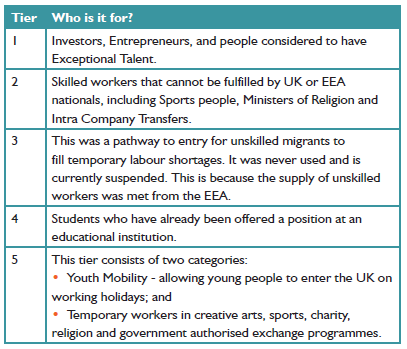 The Government currently manages the demand for non-EEA skilled employees by maintaining a shortage occupation list, overseen by the MAC. This could provide a model for skilled workers in agriculture, – for instance the dairy sector, – and could also be extended to accommodate low skilled occupations.

What does the future hold?

We await details of the Government’s proposed future immigration regime, particularly in reference to this sector.

A scheme to protect the future status of EU workers has recently been announced by the Government. Therefore, if you or your clients are currently employing EU nationals we strongly advise that they apply to the Home Office for confirmation of their status as soon as possible. Permanent labour requirements must be adequately catered for through a long -term immigration system that recognises different sectors’ needs for both high-skilled and low skilled labour, much of which currently comes from the EU. This must include realistic assessments of the ability of the domestic workforce to fill such roles in the short to medium term.

We hope some solutions are provided in the MAC report, due to be published in September this year.

Trans discrimination: What employers have to prevent, and how they should go about it

Over the last 10 years, societal awareness of trans rights and the challenges the community faces has grown massively. Unfortunately,…

Everything you need to know about settlement agreements and what to do if you are offered one by your employer.…

Will the UK introduce a four-day working week?

The COVID-19 pandemic has led to increased support among workers for a four-day working week with no loss of pay.…

Following on our recent Looking Back, Going Forward seminar in our Woking office, this article looks at some of the…